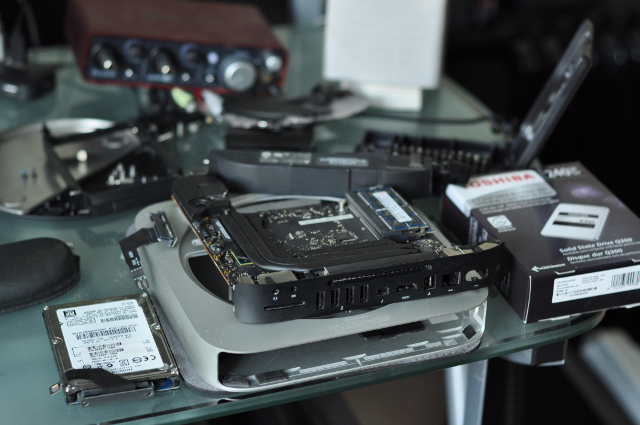 I upgraded my Late 2012 Mac mini with a new SSD. I picked up a new 240 GB OCZ Vector 180 SSD from Frys Electronics this morning. My first SSD was a 120GB Patriot given to me by a friend. It ran for several weeks, but it had all kind of issues. I ended up reverting back to my hard drive.

A week ago, I tried a Toshiba Q300 (pictured below). It failed. I couldn’t even get it to clone my hard drive. I tried using the Mac’s Disk Utility, Carbon Copy Cloner and Super Duper, but none worked. It must have been just a bad drive. I returned it and got the OCZ. I paid more for $30 more for it, but it’s worth the price.

I used Super Duper to clone the drive. The clone/restore process took just a little over an hour. Super Duper was able to make the disk bootable. I selected it and rebooted. Just like that, I’m now running my Mac mini on the faster and much more responsive SDD.

Here’s a picture of the Mac mini taken apart. I’ve done it a few times that I can probably do it blindfolded. Not really, but you get my drift. You can see the Toshiba Q300 on the right which I ended up returning. My 1TB hard drive is on the left side. My Focusrite USB audio interface doing its job, holding down all my power, ethernet and USB cables from falling off the table.

I’m quite happy with this upgrade to say the least.

I have a couple of BASH scripts that I run overnight via cron. The script uses the s3cmd command line tool to interact with Amazon S3 storage on the cloud. One day, the script just stopped working. I couldn’t figure out what’s changed.

Upon further investigation, it turns out to be a permission issue. Somehow, the .s3cfg files where the Amazon credentials and other things are stored have changed ownership to root. I used the chown command to change ownership back to the user.

The cron job is once again working like a charm.

I performed a Linux Server upgrade from 12.04 LTS to 14.04 LTS last night. Disaster. Well, the upgrade wasn’t quite as seamless than I thought. Apache died. I was getting 500 error on all my websites. I wasn’t about to spend hours trying to fix Apache, and who knows what else was not working. I have several applications running on my Linode VPS server in addition to the standard LAMP. So, I started the image recovery 20 minutes after I found out things weren’t working as well as they should be. My only other option now is to create a new server from scratch with the latest Ubuntu Server release, and then migrate all my apps and data. I think I’ll wait for 16.04 LTS to come out in a couple of months.