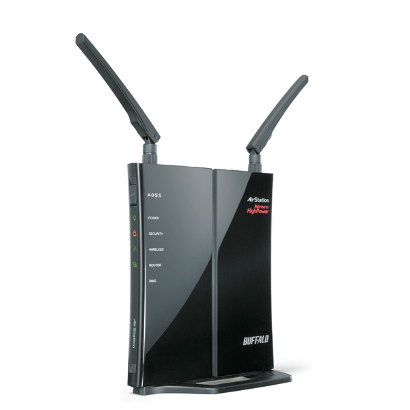 The Buffalo Airstation WHR-HP-G300N is a high-powered Wireless-N access point and router. It’s capable of transfer speeds up to 300Mbps. It operates at 2.4Mghz and comes with 4 Ethernet/Fast Ethernet ports. The firmware is powered by open-source DD-WRT.

So, I bought three Buffalo WHR-HP-G300N wireless routers for a client about a month ago hoping they would be a great addition to a list of reliable and stable access points that I will be maintaining. I ended up returning two of them due to issues with the signals that were dropping out after about a day or two.

I kept one router for testing purposes. I left the router running for about a week or so. I noticed that the wireless signal would disappear after about a day. I had to reboot the access point to get it working again.

I’m very disappointed about the wireless router being unstable. The wireless signals would disappear after a period of time. I went to Bufallo’s website and downloaded the latest driver. The page indicates that the latest firmware, although Alpha, V24SP2 17798 Alpha, is dated at Dec 5, 2011.

The firmware that came with my unit is the latest professional version, V24-SP2 build 17135, which is built on June 6, 2011, which is the one having all the issues. I had no choice but to try the latest version, although it is alpha.

Suffice to say, after the firmware upgrade, the wireless signal has been stable. No drops. No reboots needed. The WHR-HP-G300 has been running for almost a week now. It seems that Buffalo has fixed the issues with the signal drops.

If you’ve purchased the Buffalo Airstation WHR-HP-G300N and you are having issues, you might want to consider upgrading to the latest firware, V24SP2 17798 Alpha, dated Dec 5, 2011.