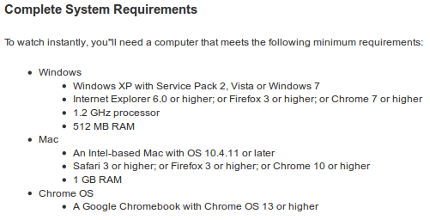 Microsoft Silverlight is a powerful development platform for creating engaging, interactive user experiences for the web, desktop and mobile applications, either while connected online or offline. At least, that’s what Microsoft’s says on its website. Silverlight is a browser plugin people use to view streaming movies, videos, and sporting events, as well as running business applications online. Microsoft touts that Silverlight works on all browsers, from Firefox, Chrome, Safari, and of course, Internet Explorer.

However, Silverlight only works in Windows and in Safari on the Mac OS. It doesn’t work in Linux. There are however, several open-source alternatives, like Moonlight, which mimics Silverlight. But it has come up short. There are still a number of Silverlight-powered websites that are inaccessible from the Linux desktop. Netflix comes to mind. There are also several major sports leagues that use Silverlight exclusively for live streaming. The NFL, MLB, NBA, and the MLS are just a few.

Netflix uses Silverlight because of the DRM or digital rights management issue. Netflix has to some way protect movies from being pirated online, hence the use of Silverlight. Here’s the Netflix message you’ll get if you try to run Netflix on Linux. It doesn’t really say it doesn’t support Linux, but Linux is not on the list.

Microsoft or Netflix has no plans whatsoever to include Linux users into the fold. Micorosoft doesn’t seem bothered that Linux users are being isolated from viewing popular video streaming websites. I don’t see Microsoft or Netflix changing their stance anytime soon. They are certainly not going to throw resources to develop Silverlight for the Linux desktop. It’s really a shame, because I still have to keep an old copy of Windows XP running either in a dual-boot configuration or in a Virtualbox, just for the purpose of accessing Silverlight-powered websites and other programs that work in Windows only.

I won’t hold my breath for this to change anytime soon. Maybe, one of these days Linux developers can come up with a better alternative to Moonlight. Waiting for Microsoft to open up the source code for Silverlight, is a waste of time. In the meantime, you can get a Roku box or a Xbox 360, albeit a Microsoft product, to view Netflix and other websites online.

But, there’s a catch. You also have to fork out an additional $60 a year for Xbox Live, and whatever additional subscription price others have with their services. Microsoft technology is just the opposite of what open-source and Linux stands for. It’s all about money and doesn’t care about standards.  It just doesn’t act in the best interest of all.