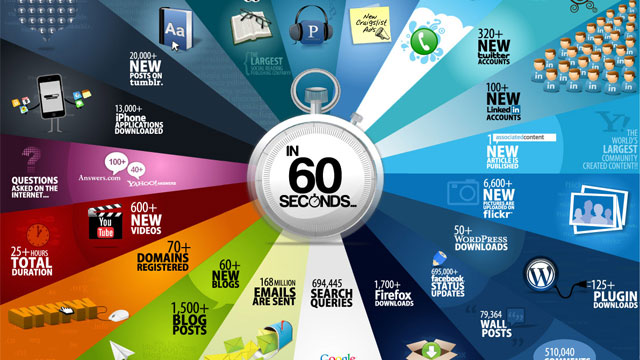 Ever wonder what happens on the Internet every 60 seconds? Gizmodo has this graphic (below) that outlines what happens if you doze off for just a minute. It goes on to show you, there are a ton of activity on the internet every minute, every hour, and 24 hours in a day. Here are some impressive stats:

Firefox 5 includes new performance, standards and privacy improvements as well as improving the overall stability of the browser for Windows, Mac, Linux and Android users.

“Firefox 5 is the fastest Firefox ever, and also the fastest ever to market,” Johnathan Nightingale, Director of Firefox at Mozilla told InternetNews.com. “Our new rapid release cycle means that the improvements get into users hands more quickly. The latest version of Firefox includes more than 1,000 improvements and performance enhancements that make it easier to discover and use all of the innovative features in Firefox. ”

Among the changes is improved visibility for Mozilla’s Do Not Track implementation. With Firefox 5, users can now use an interface item to select whether or not they want websites to track them. Firefox has been supporting a Do Not Track implementation since the Firefox 4 release, though with Firefox 5 it is now user visible. Firefox’s Do Not Track is a simple binary expression  — when enabled, it sends an HTTP header that says, DNT=1, which means: “do not track me.”

Apple is just about to release a newer version of the MacBook Air (sometime in July). This is the third release of the MBA. As most remember, the last MacBook Air release was back in November 2010. I bought one shortly after the release. So, what’s new with the new MacBook Air 2011 edition. Here’s the list of features: