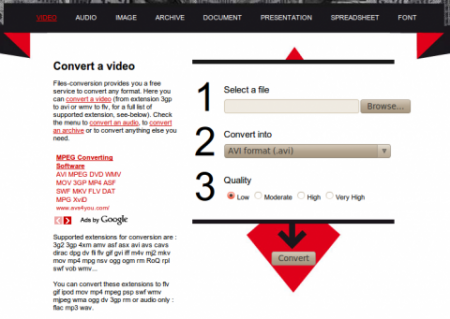 Several days ago, I mentioned about converting video files using a Windows program called WinFF. Today, I would like to talk about an online tool conversion tool that converts audio, video, image, archive, fonts and Office documents into any of the popular formats available in each category.

The online conversion tool is available in many languages like French, Italian, Spanish, German and many others. The online tool is totally free, but do take donations. If you are looking to convert one file format to another, give this website a try. It’s easy as uploading and downloading a file.

Twitter has given developers enough warning of the switch. In fact, Twitter has postponed the cutoff date at least twice in the past few months to accommodate developers into adopting the OAuth authentication protocol. This time, the cutoff date will most likely stick. What this means is there will be a number of applications that will no longer work after the deadline.

One way of finding out which plugin uses OAuth is to check the plugin’s Option pages. If you’ve entered your Twitter credentials such as username and password, then you are using the older and soon to be obsolete basic authentication.

If you’ve entered a consumer key and a consumer secret key, then you are using OAuth authentication protocol.

Another way of finding out if your plugin uses OAuth is that the login process should take you back to the Twitter’s login page such as the example below.

To be sure, check for updates of your plugin. If the developer does not plan to update the plugin, better start looking for an alternative.

I didn’t get a chance to look at each plugin because of the sheer number of Twitter-based plugins in the Plugins directory. One plugin that supports OAuth is Twitter Tools.

Nautilus is the file manager for the Gnome desktop, the default desktop environment for Ubuntu and countless other distributions. I run a local web server on my desktop with the default webroot located in /var/www.

If I copy files to /var/www or any of its subdirectories, I will need root access. Ever wonder how to open the Nautilus file manager as root?

To open Nautilus as root, open the Terminal from Applications -> Accessories menu.

Using Nautilus can really speed up and make work easier. You can use common mouse movements such as drag and drop, as well as keyboard shortcuts such as cutting and pasting.

If you want to take another step further, you can add this superuser shortcut to your menubar.