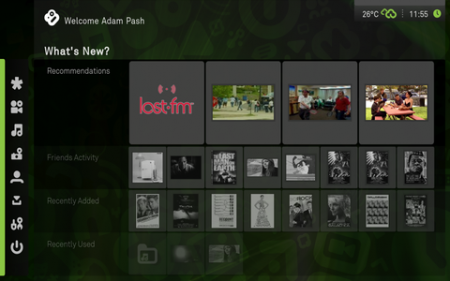 I finally got a chance to play around with Boxee on my desktop which is running on Ubuntu Hardy 8.04. Boxee is an entertainment aggregator which can play Netflix, Hulu, CBS, Comedy Central, Last.fm, and flickr. In addition, it can also play local movies, music and photos.

The interface is slick and intuitive. It’s based on an easy to use menu system that can be learned easily. I was able to watch Netflix, Prison Break and a couple of other movies in a drop of a hat. It takes a little getting use to for someone to get a feel how the software works, but after a couple of minutes, you can get a couple of TV shows playing on your computer.

There are a lot of content out there, but my only beef is that the list of shows is not comprehensive enough. But, that’s not the fault of Boxee which merely works as an entertainment aggregator. Boxee runs on the Apple’s Mac, Apple TV and Linux machines. Surprisingly, it doesn’t run on Windows, but it will soon.

A Yahoo article lead me to Boxee. Here’s some details of the article worth mentioning:

Boxee will play the music and movies you have on your own hard drive. But it will also play content from services like Netflix, Hulu, YouTube, Shoutcast, Last.fm, Flickr, Picasa, CNN and lots more. Itâ€™ll pull in video podcasts and if you want a podcast Boxee doesnâ€™t offer, you simply add the URL of the feed.

You access all this content through an attractive and fairly intuitive interface designed for being navigated with a remote from the couch.

The last part of the package could turn out to be the most powerful. You can share what youâ€™re watching with other Boxee users and they can share their viewing habits â€“ and recommendations â€“ with you. As more and more video and music becomes freely available on the Web, those kinds of recommendations from people you trust could become a great way to find the best of the avalanche of content.

Give Boxee a try. If you are a Windows user, you may have to wait a few more weeks unless you try and install Ubuntu for free now.

I recently read an online news article in the New York Times regarding Ubuntu and Mark Shuttleworth, the billionaire founder of Canonical, the company behind the open-source Linux distribution called Ubuntu.

The article gives Ubuntu some much needed exposure especially from a non-technical publication or news organization. The article focuses on the rise of Ubuntu and Mark Shuttleworth and its battle against Microsoft.

It’s worth a read. Let me highlight the more notables quips in this article.

Created just over four years ago, Ubuntu (pronounced oo-BOON-too) has emerged as the fastest-growing and most celebrated version of the Linux operating system, which competes with Windows primarily through its low, low price: $0.

But Canonical, Mr. Shuttleworthâ€™s company that makes Ubuntu, has decided to focus its near-term aspirations on the PCs used by workers and people at home.

Close to half of Googleâ€™s 20,000 employees use a slightly modified version of Ubuntu, playfully called Goobuntu.

The Macedonian education department relies on Ubuntu, providing 180,000 copies of the operating system to children, while the Spanish school system has 195,000 Ubuntu desktops. In France, the National Assembly and the Gendarmerie Nationale, the military police force, rely on Ubuntu for a combined 80,000 PCs.

Microsoft had an estimated 10,000 people working on Vista, its newest desktop operating system, for five years. The result of this multibillion-dollar investment has been a product late to market and widely panned.

Canonical, meanwhile, releases a fresh version of Ubuntu every six months, adding features that capitalize on the latest advances from developers and component makers like Intel. The companyâ€™s model centers on outpacing Microsoft on both price and features aimed at new markets.

The latter part of the article covers Mark Shuttleworth which is always an interesting read. Nonetheless, it’s great to see Ubuntu making it to the New York Times. Here’s the full article.