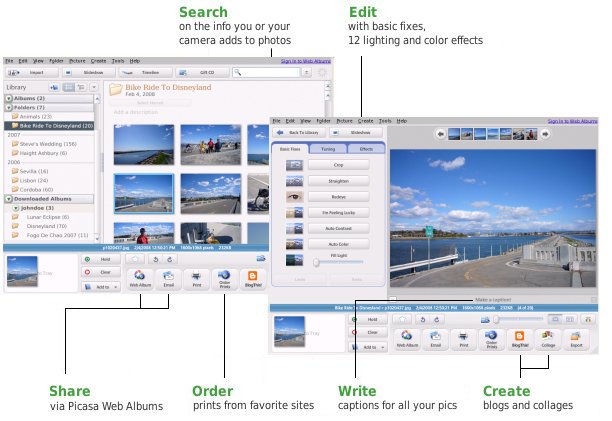 Picasa for Linux is a free software download from Google that helps you:

Every time you open Picasa, it automatically locates all your pictures (even ones you forgot you had) and sorts them into visual albums organized by date with folder names you will recognize. You can drag and drop to arrange your albums and make labels to create new groups. Picasa makes sure your pictures are always organized.

Picasa has 3 modes for editing pictures. The Basic Fixes, Tuning and Effects. The Basic Fixes allows you to crop, straighten, remove Red Eye, Auto Contrast, Fill Light or automatically have Picasa adjust the photo for you using the “I’m Feeling Lucky” button. The Tuning mode allows you the Fill in the light, adjust Highlights, Shadows and Color Temperatures. The Effects mode allows you to add effects to your photos like Black & White, Sepia, Film Grain, Glow, Soft Focus, Sharpen, Warmify, Tint, Soft Focus to name a few effects.

For RPM based systems

For Debian based systems including Ubuntu

Once installation is completed. You will find the Picasa application under “Graphics” menu in Gnome.

The Web Developer Extension is a plugin extension for the Firefox browser. It’s a great tool for web designers or for anyone who owns and manages their own website. Here are some of the Web Developer’s features:

Windows is a popular and a bigger target for malware. Meanwhile, the Linux operating system remains practically virus free. So, why am I installing an anti-virus software on a Linux system? Is it necessary? Most likely, you will not find a virus on a Linux system. But, you may have downloaded an infected document specifically written for Windows that you can pass along to a Windows user. At the very least, you will earn extra points for being a good samaritan.

There are a number of factors involved as to why Linux is practically virus free. Linux is less popular and a harder target for malware, the Linux privilege system makes it more difficult to write, install or attached to files, certain Linux distributions like Ubuntu have no open ports except for services specified by the user.

Avast is software designed to remove and protect computers from viruses, spyware and rootkits. It’s free for non-commercial use with automatic updates. Avast boasts 50 million users worldwide. Why Avast? I’ve had good success with Avast in the PC front. I thought I would give it a try in Ubuntu Linux.

3. Once installed, press Alt-F2 and type `avastgui` to run the Avast.

4. This is the main Avast screen. Before you scan for the first time, I recommend you update the database first. It will take several minutes to download the latest Avast database, but it’s a minimal wait for those with broadband connections. Once finished, you have several options which directories to scan, either your home directory, selected folders or the entire file system. There are also 3 ways of scanning: quick, standard and thorough. Select one and click `Start Scan` to begin.

6. You can run Avast from root via the terminal by typing the following:

7. Like most results, 99% of the time, you will not find a virus unless you’ve downloaded one of those Word document files!