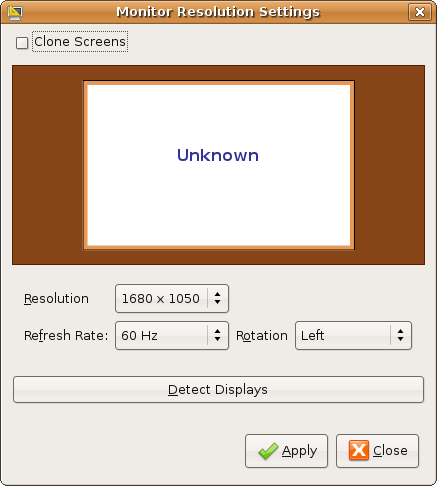 About a month ago, I had a little computer glitch. I ended up reinstalling Windows XP, but I ran into some more problems when Windows updates began to trickle in. I just couldn’t get past Windows Authentication since I didn’t have a valid license.

I was literally stuck with Windows XP SP1. There were some programs that refuse to install unless I had SP2. So much for that idea.

Then, Solaris came out a few weeks ago, I tried to install it by overwriting my Ubuntu partition. The Solaris installation was smooth. There were no issues. However, running it is another story.

There were two major problems:

I wiped out the entire disk and removed the two partitions. I installed Ubuntu as the only OS on my computer. Câ€™est la vie, Windows.

The only thing I missed in Windows is viewing in portrait mode which is great for browsing websites and documents, while landscape mode is perfect for viewing spreadsheets.

So, did I get portrait mode working in Ubuntu?

I had an old ATI graphics card which I learned later that it had issues with rotating views. I ended up buying an older Nvidia FX-5200 from Ebay for a fairly good price.

So, here’s my setup.

I set the device section of my Xorg.conf to:

So, this is how I setup my Ubuntu in Portrait mode with my HP w2207h monitor and my Nvidia FX-5200 video card. I will note however, that are currently issues with running Xrandr with Compiz at the same. Unfortunately, you can’t have both. Other than, I’m a happy camper.